As part of the series’ 8th anniversary and upcoming movie, there will be a set of “special unit” drama CDs released in late 2018. Kiiyan will join Suzuki Tatsuhisa (Kurosaki Ranmaru) and Midorikawa Hikaru (Ootori Eiichi) as one of the units. The CD will feature one group song, the off-vocal version and a drama track. … END_OF_DOCUMENT_TOKEN_TO_BE_REPLACED

Today Comic Bunch announced a drama CD for this ongoing historical military manga by Nakajima Michitsune. Kiiyan will be voicing the main character, Bernrd Baltzar, and will be joined by Miki Shinichiro, Hatano Wataru, Takagaki Ayahi, Yamashita Daiki and others. The CD will come bundled with the manga’s 11th volume, due out on May 9th. … END_OF_DOCUMENT_TOKEN_TO_BE_REPLACED

A new Uta no Prince-sama “Alice in Wonderland”-themed drama CD featuring Kiiyan, Suzumura Kenichi, Suzuki Tatsuhisa and Morikubo Shoutarou will be released in January. The CD, “Lost Alice,” boasts four tracks: a theme song (Lost Alice), two drama tracks and an instrumental version of the theme song. There will be two versions: limited edition and … END_OF_DOCUMENT_TOKEN_TO_BE_REPLACED 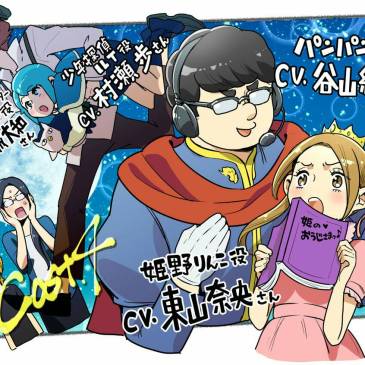 Kiiyan joins the main anime cast on the first of three drama CDs for this series. Volume ones features a mini-story collection and cast commentary. Samples can be listened to on the Animate Channel site.

It was announced this week that the 22nd volume of Junjou Romantica, due to be released on January 1, 2018, will include a special drama CD to celebrate the manga’s 15th year, featuring the full cast. Kiiyan will reprise his role (Takahashi Takahiro) as the older brother of main character Misaki.