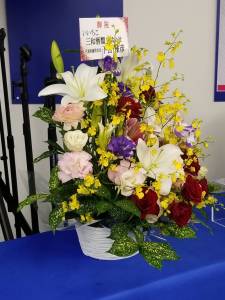 I was lucky enough to win a free ticket to the second “Take Me to the OH!ita” talk show that took place December 15th at Animate Yokohama. I was *really* lucky to score seat number three, so I was about two meters, tops, from Anri Katsu and Kiiyan, directly in front of me.

Seating started an hour before the show, which meant we had a lot of time to kill. Animate was playing Christmas songs (I wanted to sing along with The Pogues and the Jackson 5 — folks should be glad I didn’t!), and Mariah Carey’s “All I want for Christmas (is you)” when I came in, which seemed quite fitting! We were also encouraged to take pictures of the flowers from Iichiko, and Kiiyan’s Iichiko ambassador pin (which he explained later is Napoleon Bonaparte on a horse). Plus they had can badge gacha machines in the back.

The last song before Kiiyan, Anri Katsu and Hayashi Yuu came out was Rod Stewart singing “Auld Lang Syne.” When they came out, they sat just as for the first Rock Holiday shows — Kiiyan and Anri on the left (in front of me) and Hayashi to the right, in the MC role. The format of the show was that they showed pictures that were outtakes from the DVD and then chatted about each. 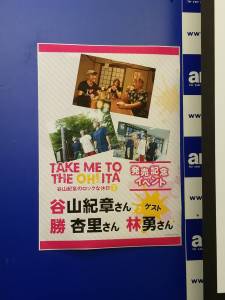 The first set of pics were “fan service” shots, starting with Kiiyan in a towel in an onsen, sitting where you can’t see the waterfalls behind the pool, his back to the camera, smiling back over his shoulder at the camera.

The second shot was as in the DVD, Kiiyan in the water with the waterfalls behind him, one nipple visible. Of course Kiiyan (on stage) played with said nipple on screen.

The third shot, same point of view as the first, showed that Anri and Yuu joined him. Well … they rolled up their pants legs and went in. Kiiyan talked about Yudsonsen and the fan club trip for his birthday. Anri asked Kiiyan “any fan club members here?” And Kiiyan said most likely there were. Heh. All the onsen talk prompted Hayashi to say he wanted to go an onsen, to which Kiiyan pointed at the screen, as if to say, you

had your chance, dude.

Hayashi pointed out that particular onsen was known for athletes coming there to heal injuries, such as Hanyu Yuzuru.

The next pic was a shot of the three of them drinking iichiko milk & coffee drinks that they bought at a vending machine at the onsen. Kiiyan and Anri poked fun at Hayashi for having his hand on his lower back (made it look like he was hurting). 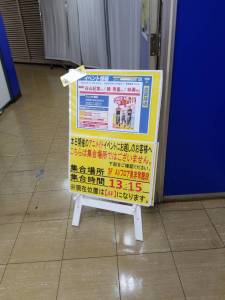 They talked about what they like to sing at karaoke. Kiiyan mentioned B’z and another artist whose named I missed (maybe Okamura Yasuyuki?). Anri says he doesn’t generally sing Japanese artists, but likes to sing The Beatles and another artist Kiiyan knew, but I did not recognize the name of.

Kiiyan’s tweet … came out of pointing out Hayashi’s birthday, April 2 and his age, 35, making him the same age as Mamo, Terashii and Tatsun, but Kiiyan kind of flubbed Tatsun’s name, so Anri turned to us to clarify Tatsuhisa. Heh. Kiiyan was convinced there was something significant about April 2nd (I never could catch what, but I’m guessing the cutoff for the school year?) and he finally asked someone to Wikipedia it. So the woman two to my right did and said April 1st, embarrassing the back out of him. So cute!

Kiiyan talked about coming to a well-known amusement park in Outside as a grade schooler.

After the still photos, they shared a video outtake of the three of them discussion what led them to become seiyuu and singers. In the aftertalk on stage, Kiiyan mentioned having wanted to be an animator, and Hayashi confessed to having wanted to grow up to be an NBA player, which was, obviously, not going to happen. Kiiyan mused that was something he probably wanted to grow up to be too.

At the end, they gave away seven signed iichiko catalogs, five signed DVD covers and three signed iichiko aprons. Most of the seat numbers they drew were from the back, but the woman next to me won one of the catalogs.

As is usual they each said something to wrap things up, though they got side-tracked when Kiiyan pointed out the two trips had been the three of them and somehow they got to talking about Hatanaka Tasuku.

After that, they announced a surprise high five starting with the front row. As I stood up and was collecting my things, I made eye contact with Hayashi, who’d moved to my side of the stage and was taking a drink. I guess he hadn’t noticed me before, because my did his eyes get wide. Heh.

It was a delight to see the three of them again on stage, and I would really like to see more events with Kiiyan and Anri. They are clearly such good friends, and it comes out in their humor.